Top 10 actresses is something we do all the time, but far too often we just do the same thing over and over: top 10 actresses. This time I’m adding a bit of a stipulation – only active actresses. 2018 was a bad year for retirements and 3 of my top 10 retired or announced their retirement. For the record, those three are Kaho Shibuya, Chitose Saegusa, and Asahi Mizuno. Now more than half of my top 10 are retired. That’s not even where it stopped either, another few I liked followed suit including RION and Aki Sasaki, and several other big names in the industry retired, announced retirements, or just aren’t actively working anymore. I thought this time around it would be more interesting to make people put a bit of thought into it by adding this stipulation, myself included.

For my list, I decided not to include those who announced retirements or are not actively shooting. For anyone participating and making a list, feel free to use your own judgement on what is or isn’t active.

Hibiki is someone I watched in one of my “new to me” weeks. She wasn’t even someone I picked out, she was recommended to me. To see her now making a top 10 list like this is kind of crazy. Hibiki is all kinds of pretty and made that top 10 list of mine. Hibiki turned out to be a better performer than I anticipated, and even though a third of the videos I’ve seen of her co-star Yui Hatano it’s been Hibiki I’ve enjoyed (okay, Yui is still pretty good). Hibiki is much like Yui, lots of content, good performing, lots of variety. The reason Hibiki made the list instead of Yui was that I think Hibiki is more attractive. She’s someone I definitely could see climbing lists so we’ll see how things go as I watch more of her.

Aika was someone who, once I got into them, I just couldn’t stop watching. Aika’s this little ball of awesome who stood out among the crowd at S1. Aika seems like she’s always having fun and that goes a long way. One of the things that sets Aika apart is how consistent she is. Her videos are basically always decent and never really super impressive or bad. It’s a little bit unfortunate because I want to find really good videos of hers, but there’s something to be said about going into a video knowing you won’t be disappointed. I doubt Aika will remain so high on my list if she stays at S1 but I’m definitely still a big fan.

Mio Kimijima was someone I downright didn’t like at first. She was a mediocre performer and I just didn’t find her all that attractive. But as time went on and I saw more of her content I ended up becoming a fan. Sometimes it’s all about finding the right videos and that certainly happened with Mio. I wound up with one that made my top 10 for 2018 as well as a second honourable mention. Mio’s path is actually very similar to Rena Fukiishi’s: retire, come back under a new name a while later, take the industry by storm by producing a ton of videos. Mio had so much content come out and I think that’s a big reason why I enjoy her. When an actress has such a large catalog it’s so easy to find content you’ll enjoy. While Mio isn’t quite so high up on my list I think it’s a product of how many videos of hers I’ve seen. I think she has a ton of potential and I could see her way higher up.

Kaori is pretty much the definition of thicc milf. Yeah, her breasts are fake and not the nicest, but everything else is great. Kaori really sets herself apart with her ass, it’s easily one of the best in the industry and it’s personally my favourite. Last year was a particularly good year for her where she had a number of really sweet releases. She really stepped up her performing and went from someone who’s about average to someone I enjoyed a lot. While I doubt Kaori will ever make an “all-time” top 10 list of mine her last year definitely makes me think twice about saying that.

Yuri is someone I first came across during her GES entry. It was good but I didn’t really get into her until much later (2017). After I got into her I became a huge fan. She’s pretty, curvy, and is generally enjoyable. Yuri’s definitely someone I enjoy more than I feel like I ought to, because a lot of her videos aren’t anything special. And yet, I keep coming back for more – there’s just something about her that’s captivating. There’s still a lot of room for her to grow and really become someone great. Something tells me she won’t make my top 10 all-time list ever, but I’ll still continue to enjoy her for sure.

Ai Sayama was someone I’ve always liked but never loved, but in 2017 that all changed. When I watched a bunch of her stuff that year I got reminded just how good she was. Tons and tons of good content, so I kept up watching her last year and also went back to watch a few older stuff. I was pleasantly surprised at just how good everything was. She’s still producing fantastic content (her December release last year made my top 10 list for the year) while she has amazing content from even 7 years ago. To be this great for this long is quite something and absolutely why she’s here on the list. It very much wouldn’t surprise me if she made my “all-time” top 10 list in the near future.

Julia is the first of my “all-time” top 10 to make the list. I guess it’s kind of a spoiler to say that but I don’t think people are going to be surprised at all about the next two actresses. The biggest thing for Julia is how attractive she is. Very pretty, slim figure, nice breasts. I find Julia to be really hit or miss – she’s one of the most inconsistent actresses I follow. Julia has a fair amount of good content but also a fair amount of really mediocre stuff. Still, at the end of the day, good Julia goes a long way when she’s as attractive as she is, and there’s enough good content to keep me satisfied.

Rena’s someone I think I’m in the minority for liking. I totally get that she’s not for everyone and I have no problem with people not liking her. That being said, I really like her. I find her surprisingly attractive, even I’m not sure why. It’s kind of interesting because I ignored her for a while until one day I decided to check her out; I haven’t turned back since. On top of that she’s got a large catalog with a lot of variety. I basically just keep finding good videos I haven’t seen because there’s just so much available. Even though Rena’s output isn’t what it once was, getting into new genres like BBC, anal, and uncensored has really cemented just how much I like her.

Hitomi has been my favourite for basically as long as I can remember. I’ve been following her since her debut and she’s primarily why I got into JAV the way I did. It’s obvious to everyone that her breasts are why I’m such a big fan but it’s an overstatement to say that’s the only reason she’s this high on the list. I think Hitomi is very pretty as well as a wonderful performer. It’s true that she sometimes has some mediocre videos, and that’s been especially true lately, but she has a ton of really good ones. Her most recent video is actually easily among her best and will pretty easily make my top 10 list for this year. I really wouldn’t have it any other way, Hitomi is my favourite and that’s all there is to it.

So that’s my top 10 active actresses. It’s a shame so many retired last year and I’m really hoping some of the new actresses can step up. I’m also curious to see who everyone else likes especially since active only gives a chance for some names people normally don’t talk about to show up. We’ll probably revisit and do top 10 retired actresses somewhere down the line. 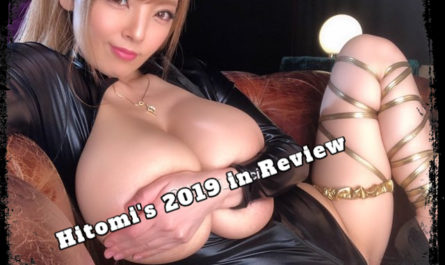