Being sold on the cover is something I’m sure we’ve all done, but it’s been a while since something has come by where I have been completely sold on from beginning to end. Yuuna Ishikawa is a pleasure in this film with her performance, and outstanding costumes. She flows naturally with the actors for the most part, and her noises are natural and don’t come off as annoying. Her sexual positions, mannerisms, and dirty talk during the film are superb and just a joy to watch and listen to. The lighting and color are bright and even during the low light scenes, she is at the forefront and you will not have any trouble enjoying her. The few complaints I have are so minor it doesn’t detract me from having this film on rotation.

The great:
Dirty talk (even though I can’t understand it) is nice to hear and is a joy to listen to her talk to her teacher as she guides the action through the positions.

The good:
The costume is just too damn good with her in it. While we may not see her completely naked, this might be the one time I prefer the costume stay on completely. And by completely I mean she has on the shoes, thigh highs, and everything else during the entire scene.

The bad:
The kissing was great when it was actual kissing, then as the scene went on, it devolved into a lizard-style of tongue flicking.

The great:
Dirty talk throughout the entire time keeps this scene from being stale. Her convulsions during the solo portion are convincing and the low angle shots were a wise decision as it keeps you in the moment.

The good:
When the actor enters the scene she keeps her focus on him directly and doesn’t deviate to stare at the camera to ham it up.

The bad:
Not a fan of pissing in these films, so when she does a fair amount into his mouth, it was slightly off-putting.

The great:
She performs really well with the positions; so fluid moving from a standing position to sitting to standing to kneeling. There is no wasted space in this scene, she’s kissing, running her fingertips on him, caressing, and guiding him to the next motion. It was nice to see her engaged like that.

The good:
Her glasses during the POV are the just as memorable as her slurping and masterfully using her tongue.

The bad:
She does a little paizuri which she was not built for.

The great:
Camera work is superb. Great cuts to really put you in the thick of things such as when she’s giving a BJ on the table the camera would be positioned to her pussy, then slowly pan to the side view and holds it there for a bit, then slowly works the camera back to her for a tight close up just as she rises up from giving a BJ and a little drool would come out and she’s transitioning to straddling his dick in a cowgirl position.

The good:
The amount of focus she has on the actor and the dirty talk that goes on really add to the flavor of this scene.

The bad:
Would’ve liked a bit more time to enjoy her in the costume to enjoy its sheerness.

She is a fun performer in this film and she looks cute as hell. I was happy to see the costume stay on throughout the scenes and she looked comfortable performing in it. Camera work was well done and showcased her face properly and the set design for the most part, was a great contrast to her skin tones. A great watch that earns a 4 out of 5 for me. 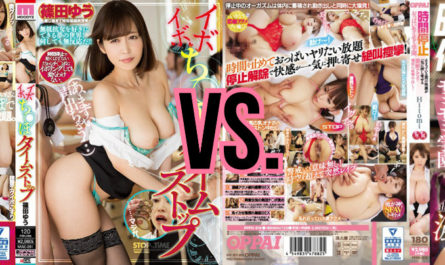