You would be forgiven if you skipped right past this title because the cover isn’t going to promise you something you’re not already aware of. Two amazing buxom beauties posing for the camera in skimpy clothing is nothing new. The back of the DVD cover doesn’t give any clue either; you’ve got both Anri and Hitomi engaged in various positions looking spectacular as they should, and a subtle color scheme to their costumes.

Having said all that, you can still skip this film. But I should warn you now, you will miss out on the most erotically charged film I have ever seen. A lot of what makes this film a classic is its ability to sell you on the passion on screen. You won’t see a paint-by-numbers scene from these two. They look at each other longingly and kiss passionately in the movie. Every move they make is feeding off of the action in the scene and will leave you feeling a sense of completion that the scene started with a build up and then crecends into a creampie.

Scene two puts Anri in a striking cut out dress that hug every curve of her body. They’re starting out with some light fondling on a couch and before you think this is the lesbian performance, the actor jumps in and makes himself at home on Hitomi’s chest. Shot normally, we see how each girl gets fucked and played with by the other girl. Just because one girl is being fucked, doesn’t mean the other one plays to the camera. The other girl will be kissing her, sucking on her tits, and also giving a BJ for the brief moment that he’s not fucking her.

Our next scenario is my favorite out of the whole movie. Not solely because it’s the lesbian scene, but because it has some great imagery and really makes you think this was done for a high budget film studio.

The camera is in tight when their tongues are playing with one another, you can see the trail of saliva as they pull away from the other’s mouth. This was shot with passion from the director. The low angles are lit very well and you can see their tongues probing each other in crystal clear clarity. No toys in this scene just tongue on/in pussy, fingers in/on pussy, and pussy on pussy.

Next up is Anri and Hitomi each getting fucked by two different actors. This was set up beautifully by both of them snuggling next to each other on a mattress wearing lingerie. The two actors approach them and gently wake them up and Anri and Hitomi smile looking pleased as they know what is coming to them. As the actors are working on both the girls, the girls just instinctively use that moment to kiss each other and make sure there is no break in the action. A great moment in this scene is when the actor pulls out of Anri, she summons Hitomi over and as Hitomi opens her legs for a vertical split, Anri is still sucking his dick then licks Hitomi’s pussy and then guides his dick in her.

It transitions into a semen play scene where actors are ejaculating directly on their pussies and the girls work it in. Interesting to see how it got cut in, but I’m not complaining. Then as the girls come off the couch where they were for the semen play, it goes into first person POV and suck him off until he, I guess the best way to describe it, squirts.

Our finale scene has the girls in front of four men and the girls work their magic on all them. Teamwork again is the focal point and now you have the added bonus of seeing the girls take multiple creampies. The closing shot is the girls leaving the four actors depleted on the floor. As the girls are walking away, we see them kiss in the hallway and end this film.

There are a multitude of girls in JAV and this movie has two top tier girls showing unbelievable chemistry on screen. You may not list them as your favorite for whatever reason, but give this film a spot on your rotation and you will find yourself just watching a scene from beginning to end just to see how well they work with each other. Shot incredibly well with a splash of artistic creativity, this earns an easy five out five. 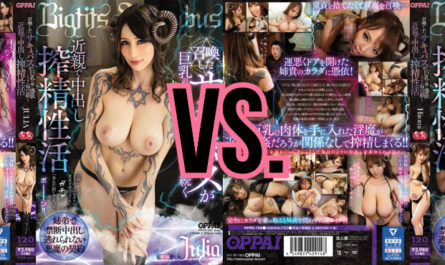